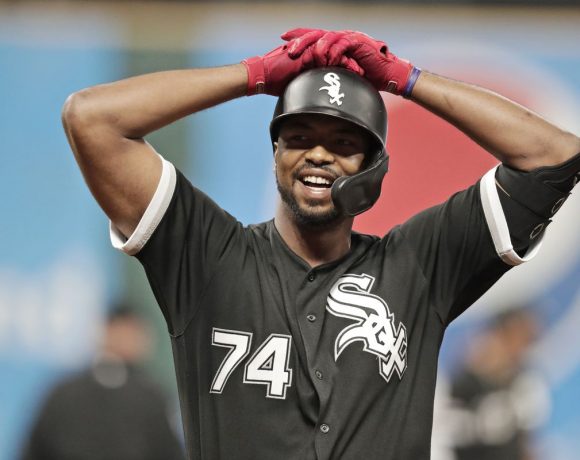 I’m not sure how many moments Sox fans have gotten this season that they can point to and say to themselves or anyone around (Sox fans rarely need an audience to perform), “That’s what it will look like very soon.” There were a few early in the season, but the year’s middle portion and toward the current end have mostly been filled with injuries or dips in performance or wonder if some players would ever put it together. It’s been a whole lot more rush-hour traffic than most were hoping, that’s for sure.

The last three games of this series will definitely be one that’s marked, as even in the loss the Sox offense was carried by those who will do so in the future and beyond, and only a circus catch kept them from taking all three of those games. There were enough glimpses around for a whole vision, and that has to feel good.

-We can start with Eloy Jimenez, who had eight hits over the four games, laced some outs that could have been hits on another day, and had one of those games he wins by himself on Tuesday. The kinds of games there will be tons more of, is the hope. A big portion of Eloy’s hits, and even hard contact, were made on sliders this series. That can go one of two ways. One is that at least a couple were mistakes, but you can make a shit ton of money hammering mistakes and fastballs anyway. What it doesn’t portend is whether Eloy can lay off the sliders that do bite off the outside of the zone and into the dirt. Or you could argue that he has been laying off of those of late, forcing breaking pitches closer to the zone, where they don’t have to miss by much to stay in the zone, and this is what you get. It’s still a work, but you can see what will happen when he forces pitchers to the zone. It’s got a lot of volume to it.

–Dylan Cease missed out on only his third quality start of the season with the aid of the pen, but it was still a big step forward from what we’ve seen. Cease way upped the use of this change at the expense of fastballs, throwing 18 of them which was the most in any start this season. That generated 12 ground-balls, which you can’t complain about. And the big thing is two walks.

-Of course, Cease struck out 11 but was overshadowed by Reynaldo Lopez, who also struck out 11 today while only giving up one hit. And the Tribe weren’t anywhere near him all day, as his slider was barking and yakking all over them. Lopez got 10 whiffs on the 24 sliders he threw, and no solid contact on any of the others. And only three walks for Reynaldo, who when he stays near the zone can be unhittable. And all of this came in a series against a team that needed these games, which might be most encouraging, even if Cleveland is a touch beat up.

–Zack Collins was on base six times in the last three games, and most ever AB was battling. The Sox might focus too much on the Ks, but he gets on base and the rest of this season should probably be spent giving him most of the starts at first or DH to see if he can take that on next season. The Sox still have an OBP problem, one they’ve had for a decade or more now, and there aren’t too many candidates to fix that. Collins is one.