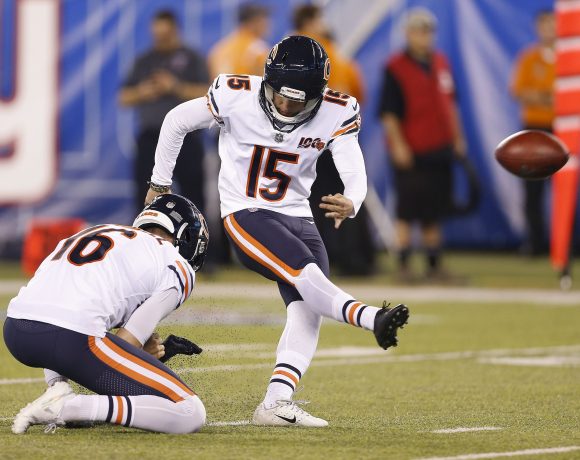 Although this is obvious to many of you NOW, I’ll let you in on a secret that I’ve known since August; the Bears don’t have a reliable kicker.

Eddy “Money” (LOL) Pineiro “won” an offseason kicking competition that was, and has now proven to be, completely worthless. The Augusta quiet practices, the kicking coordinator/snake oil salesman David Kohl, the 43-yarders, the bringing in of nine guys to compete – the entire circus produced an outcome that is no different than last year, and the year before that, and before that one too.

Pineiro was never going to be the answer. But why did I, and not Ryan Pace or Matt Nagy know this? Why couldn’t they see his glaring mechanical deficiencies that couldn’t possibly stand the test of time?

Let me nerd-out on some kicking mechanics and explain why Pineiro will not be a legit NFL kicker unless he overhauls his entire process. Here is why Pineiro can’t be relied on:

Like every kicker in the league, Pineiro uses a two-step approach. As you set up, your left foot is positioned in front of your body and should have about 70% of your weight on it. This foot (left) should be locked into the ground and provide the foundation for your first step, which is your right foot coming on a direct line toward the ball. This is where Pineiro’s issues begin. His left foot takes a false step and thus begins the first cause for an inconsistent and varied approach to the ball. By keeping the front foot stationary, you lessen the number of moving parts in the total operation and as such, provide the entire process a consistent starting point. The reason Pineiro takes this false step, is a timing mechanism, but more importantly, it provides a kicker more momentum toward the ball, which ultimately produces a faster swing speed – this is what makes the ball travel. It’s the simple definition of force; Mass X Acceleration. At 5’10, 170 lbs., Pineiro needs as much acceleration as he can get due to the fact that the mass is so low.

In case you’ve ever noticed why Eddy Pineiro’s kicking motion doesn’t look like most of the others, pay direct attention to his left arm. On the approach to the ball, your left arm should swing 360 degrees. The arm swing should start with the first step and conclude on contact. This is a small, but very important piece. But why? First and foremost, it opens up the hips, which enables the kicker to maximize his (or her, what up Katie Hnida?) leg swing and get thru the ball. Secondly, it is another timing mechanism, this time involuntary. Finally, coming “up and out” with the left arm swing provides balance to the approach. What we see from Pineiro is a left arm that darts inside his body on his initial step and then shoots outward near impact; never does his left arm make the 360 degree swing that you see from the best kickers in the game.

The movement of the right arm is probably the most egregious performance based error I can see going on with Eddy Pineiro. Throughout the entire kicking process, your right arm should remain in the same, almost a still-like, consistent position. The final movement of the right arm should direct your arm and hand toward the middle of the uprights. What you see from Pineiro is a right arm that resembles two teenagers fucking – a lot of useless movement that is sloppy, isn’t helping anything, and is actually is hurting the overall performance. This un-natural movement is why the Bears kicker does not have any sort of smoothness or in the bigger picture, any consistency. Think about your golf swing; the fewer moving parts the better right? The best players in the world make it look effortless while hitting the ball 330 on the sprinkler line. Eddy Pineiro looks like he’s trying to kick every ball out of Soldier Field.

On contact, Pineiro’s plant leg is almost always pointing left of its intended target. It should be pointing at his aiming point, which I hope is somewhere inside the uprights. The series of mishaps (noted above as # 1-3) I listed have all contributed to the reason why we have a player who is consistently failing at his job. Unfortunately for the Bears, and all kickers really, one small action can lead to a series of unfortunate events, which ultimately lead to the most unfortunate event – a missed kick, and potentially a lost game because of it. Think about when you throw a baseball. You are taught from a very young age that your off arm should be pointed at the target and your throwing arm follows toward that same target. Now think if you were to point your left arm far left of its target but still try to throw the ball at the target. Not only would it look like your dad never played catch with you, you would also lead little league team “my bads.”

I have always been a believer that whatever you do after you make contact with the ball doesn’t matter. However, your follow thru can tell you a lot about what you are doing before you make contact. Ideally, your left foot, after impact should skip thru and be the first thing to hit the ground about a yard or so in front of the ball at a 45 degree angle. Pineiro’s plant leg does skip thru, but it only lands about a foot from the original plant spot and at an angle closer to 10 degrees than 45. The result of the misplaced plant leg hop is the kicker swinging around the ball and not thru the ball toward the middle.

So now that you’ve read 1,000 words about kicking and know more about the subject that you ever thought you would, please be responsible enough the give an educated opinion on the subject and not rely on the low hanging fruit that is the overused joke about kickers not being actual football players. It’s lazy and it’s not funny. This has been my public service announcement.