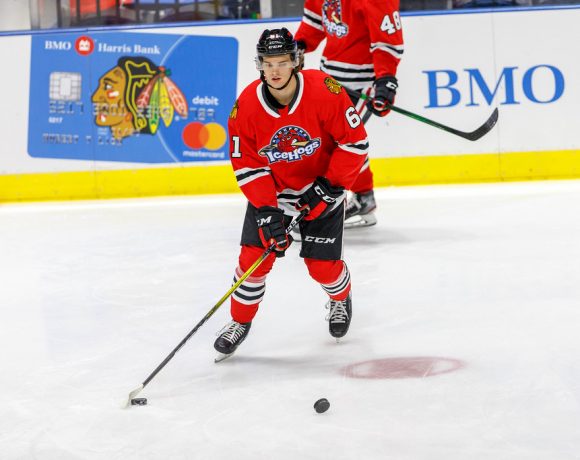 High On The Hog: Yetman Making His Mark

The Rockford IceHogs have a couple of home games this week as they continue to play for their first win of the 2020-21 campaign. The piglets collected a standings point Saturday but fell in overtime in Iowa.

Despite a 0-2-1 start, the beginning of the season has been good to a couple of players who seem to be intent on taking advantage of available minutes. One such player is forward Chad Yetman.

Yetman is Chicago’s sixth-round pick in this past summer’s draft. In normal circumstances, he probably would have finished out his junior career with the Erie Otters of the OHL. With that league currently on hiatus, Yetman signed an AHL deal with the IceHogs on January 11.

Yetman led Erie with 43 goals in 61 games last season. So far, taking the chance to jump up to the AHL and make a grab at playing time has paid off. Yetman has appeared in all three games with Rockford and posted his first pro goal in a February 9 loss to the Wolves.

Yetman racked up a pair of assists in the first period of what eventually became a 3-2 overtime loss to Iowa on Saturday. His three points are tied with Cody Franson for the team lead in the early stages of the season. Yetman has also found a spot on Rockford’s first power play unit.

With several Blackhawks prospects up getting NHL minutes or sitting on the taxi squad, there are opportunities for a player like Yetman to impress the team brass and earn an entry contract. That’s a path current Hawks forward Andrew Shaw navigated back in 2011 when he signed an AHL deal with Rockford.

Yetman’s a different type of player from Shaw, but he’s off to a nice start to the season.

Chicago made a couple of paper moves in order to keep the required four players on their taxi squad. Evan Barratt was recalled to the taxi squad Thursday and returned to Rockford Friday.

Forward Mikael Hakkarainen made the phantom trip to the taxi squad on Saturday and was reassigned to the Hogs on Sunday. Also coming down to Rockford was forward MacKenzie Entwistle, who had 26 points (11 G, 15 A) for the IceHogs in his rookie season.

With several players, like Shaw, on the injured list at the moment, it should not be a surprise to see other Hawks prospects getting similar treatment in regard to short-term call-ups.

The IceHogs picked up their first point of the season. However, Rockford let a two-goal lead slip away to end the night on a disappointing note.

Rockford drew first cord 3:39 into the game. The goal came from the stick of Brad Morrison, playing in his first game for the Hogs this season. Morrison was able to toss the puck into the Wild zone and head to the net while Chad Yetman chased it down. Yetman’s centering pass was on the mark; Morrison flipped the dish over Iowa goalie Dereck Baribeau to light the lamp.

Morrison got his second goal of the season a bit later in the opening frame. Yetman brought the puck out of the defensive zone and found Mitchell Fossier down the left side of the ice with the entry pass. Fossier took a shot from the left dot that glanced off of the skate of Iowa defenseman Fedov Gordeev. The puck bounced off Baribeau’s mask and into the crease, where Morrison scooted it to the back of the net. The IceHogs led 2-0 at the 13:37 mark and took that advantage into the intermission.

A couple of miscues allowed the Wild to draw even in the second period. Gabriel Dumont finished an odd-man rush at the 5:58 mark following a loss of a board battle in neutral ice. Later in the period, a Cole Moberg pass was picked off in the high slot during four-on-four action. Damien Giroux crashed the net, knocking in the rebound of Adam Beckman’s shot past IceHogs goalie Matt Tomkins to make it a 2-2 game at 9:52 of the second.

The action slowed in the final twenty minutes, with neither team finding the net. Rockford ended the last 1:10 of regulation and the first 50 seconds of overtime with a man advantage, but couldn’t cash in. Tomkins denied Will Bitten on a penalty shot after John Quenneville was forced to take him down on a breakaway chance.

The Wild won the resulting faceoff in the Rockford zone, and the IceHogs never touched the puck again. Beckman wound up with a shot from the top of the left circle that got under the glove of Tomkins, ending the contest.

Tomkins stopped 33 of 36 shots for Rockford and was a big reason the Hogs were able to come away with a standings point. Garrett Mitchell squared off with Dumont in an even bout midway through the third period after a big hit on the Wild forward.

Rockford has two weeknight home dates coming up. Tuesday, the Hogs face the undefeated Chicago Wolves. On Thursday, the Grand Rapids Griffins come to the BMO Harris Bank Center. Both games are set to start at 6:00 p.m.

Follow me @JonFromi on twitter for game updates, news, and thoughts on the IceHogs throughout the sesaon.