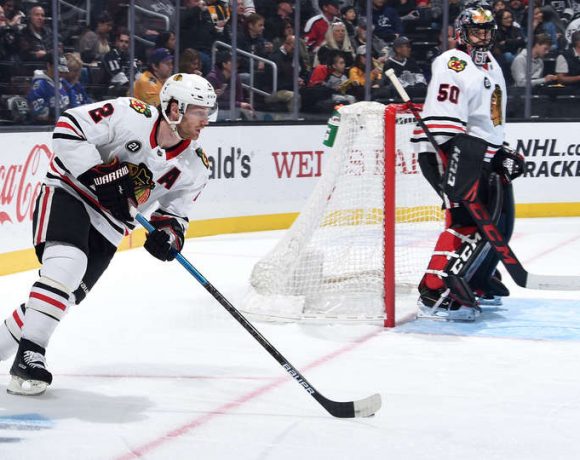 This was a poorly played game for the most part, which I guess comes as no surprise given who the teams involved were. And yet, the contrast between the dull first period when both teams ended up with a handful of themselves and the excitement of basically every other televised sporting event in the nation tonight was striking. What was worse, however, was the ending, where the Hawks took one meager point and lost in OT on a power play thanks to a terribly poetic penalty by Jonathan Toews. We knew the season was over but this is a harsh exclamation point on it. Let’s get to the bullets:

– As mentioned, the first period was mostly a back-and-forth affair between mediocre opponents, and although the Hawks ended up on the wrong side of the ledger in terms of both shots and possession (9-14 and 48 CF%, respectively), it wasn’t a painfully noticeable difference in play quality. The only part that was certifiably painful was Keith shattering his stick on a shot near the end of a late-period power play. Not only was that the personification of a sad trombone sound, but Kyle Clifford jumped out of the box just as it happened and the Kings had numbers going the other way. But fear not—Seabrook took a dumb penalty and the Kings were too useless to score on it…that time.

– Not useless was Alex DeBrincat, who scored a relatively soft goal by curling it just underneath Campbell early in the second. Top Cat is now tied with Patrick Kane as the team’s leading goal scorer, with 41, and his career total is…wait for it…69 (NICE). And yes, you’d make that joke too so shut up. Having DeBrincat and Garbage Dick on the third line is still some galaxy brain bullshit as far as I’m concerned, but I’d rather see Top Cat produce anywhere and any way that he can, rather than flail in the stupidity of bad coaching decisions. Remember, a 25-goal scorer tops, this guy.

– Erik Gustafsson‘s magic carpet ride continued with another goal, his 17th. Campbell likely was screened because he didn’t seem to see the shot coming from three miles away. However, Gus giveth and he taketh away, as his habit of doing confused pirouettes away from forwards left Michael Amadio alone in the slot to tie the game in the third. If you can’t stop a fourth-fucking-liner on one of the league’s worst teams you seriously need to re-evaluate what you’re doing and how you understand your job description.

– But wait! Before we pile on the crappy defenseman, at least he scored. Kane and Toews both point-blank fucked up multiple times in overtime. The fact this game went to OT is stupid on its own, but they had nearly a third of the 3-on-3 with control of the puck and couldn’t finish any of their shots. Toews followed that up with a penalty on Anze Kopitar, which is frustrating for its timing since that led to the winning goal by LA, and sad in its relevance for an aging, slowing legend trying to slow down nearly his mirror image. And it backfired in a pretty dramatic way, really putting the final nail in the coffin where the Hawks playoff hopes now lay. But had either he or Kane converted on any of their opportunities earlier, that penalty wouldn’t have happened. Maybe they’re tired after the amount of ice time (would be fair enough at the end of the season although tonight’s wasn’t too egregious), maybe they just don’t have it or don’t give a shit, but it did not inspire hope for the future.

– David Kampf broke some part of his face (or severely messed it up), and not that it matters now but still, not the way to end the season.

– I can’t say that Austin Wagner is any good, but I can say that he is fast. He absolutely scorched Carl Dahlstrom in the second for the tying goal (the first time), and he did it to Connor Murphy in the third but our Large Irish Son was bailed out by a Crawford poke check.

– Drake Caggiula seemed awfully excited to be back in the lineup, and yet I can’t help but wonder if he should try to avoid getting into fights rather than seeking them out, seeing as he just missed a month with a head injury. I dunno, just doesn’t seem like the best strategy. He had four shots, so that’s something, and he didn’t get into a full-on fisticuffs, but boy was he trying to.

I know I sound like a broken record but this has to be the end of the playoff delusion, even if the math doesn’t say it’s for certain yet. We all know it is, and really, if you can’t beat this lowly-ass Kings team any of the times you play them, do you really even deserve to be in the playoffs? The answer is no. Onward and upward?

Line of the Night: “Halfway through an almost scintillating first period.” —Foley, sarcastically saying what we were thinking.