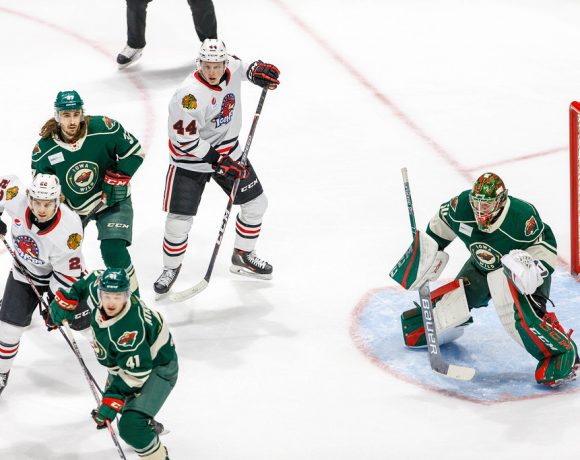 The Rockford IceHogs last took the ice March 8, when they dropped an overtime game to the Chicago Wolves. The piglets had 13 games remaining in the 2019-20 season before the AHL suspended operations in the wake of the COVID-19 pandemic.

The way things are beginning to look, the IceHogs and the AHL may be finished for the current season.

I don’t have the time to banter about the Blackhawks affiliate’s chances of returning to action in the immediate future. Maybe the season continues in some form. Maybe it doesn’t.

As I’ve been a hermit for the past six weeks or so, the Hogs have made some moves. Veteran forward Garrett Mitchell, who joined the team on a PTO February 6 and signed an AHL deal just before play was halted, will be back next season on a one-year deal.

The IceHogs also signed some youngsters to AHL ink, including goalie Tom Aubrun and forwards Riley McKay and D.J. Busdeker. Defenseman Jack Ramsey was re-upped by Rockford as well. There’s plenty of time to look forward. Let me take a quick look at my shoulder at the season that was…mostly was.

The IceHogs were 29-30-2-2 in 63 games. A more that solid opening two months gave way to struggles with injury and call ups. Additions like Mitchell, Gabriel Gagne and Ben Youds filled in some gaps and made for some interesting action this winter, if not entirely successful in terms of wins and losses.

Since the season has not officially been cancelled, there hasn’t been any mention by the team as to the season-ending awards typically given at the last home game of the season. Here’s how I saw those team awards as the regular season wound down.

Defensive Player Of The Year-Lucas Carlsson

Carlsson, unlike several of Rockford’s candidates in this category, was around for the bulk of the season. Philip Holm, the class of the first couple of months, asked for his release to ply his trade in Europe. Dennis Gilbert was up and down between Rockford and Chicago.

Ian McCoshen was hard-nosed and a regular face in the lineup. He took a lot of dumb penalties, though,  and was a minus-13 for the Hogs in 56 games.

Carlsson, on the other hand, made some strides from a defensive standpoint and led the Rockford blueline with 26 points (5 G, 21 A) in 48 games. He has outshone more regarded Blackhawks defensive prospects at the AHL level for the past two seasons.

The organization rewarded Carlsson with a call up; he appeared in six games with Chicago before the NHL suspended play.

I guess you could make a case for several players. However, if your looking for an example of a guy making a bigger impact based on his play from the season before, Fortin’s your man.

I’ve called out his finishing ability for much of the last three years. This season, Fortin put up a career-high eight goals in just 44 games. Despite spending a couple of stretches on the injured list, Fortin’s game added some sort of offensive element.

In the latter stages of the 2019-20 campaign, Fortin started to become a scoring threat after his feet generated opportunities. His shooting percentage, which was a paltry 4.3 percent in his rookie season two years ago, rose to 9.1 percent this season.

Not getting to finish the regular season was unfortunate for Fortin, who likely would have topped 100 shots (he had 88 when play ended) and career-high point production. Not sure if the Blackhawks re-sign him, but Fortin showed much-needed signs of life on the offensive end.

Rookie Of The Year-Brandon Hagel

This one isn’t even close. Hagel, who earned a call-up to Chicago in March, led Rockford with 19 goals. He was second in team scoring with 31 points. His four game-winning goals also paced the IceHogs.

Hagel being a no-brainer for this award doesn’t take away from the rookie season MacKenzie Entwistle had. Entwistle led Rockford newcomers with 15 assists and was tied with Carlsson for fourth in overall scoring with 26 points. Three of his 11 goals were of the game-winning variety. Entwistle showed up at both ends of the ice, accounting well for himself in 56 games.

Phillipp Kurashev’s freshman campaign was halted for a couple of months with a concussion suffered on December 29. Up until that point, Kurashev was starting to look very comfortable in the AHL game, with 16 points (5 G, 11 A) in his first 29 games. He returned at the end of February and wound up with seven goals and 12 helpers in 36 contests.

One of Rockford’s AHL contracts, Moutrey was a regular in coach Derek King’s bottom six. He played physical, smart hockey in an energy role. His five-goal, six assist effort in 52 games was his best point production in the AHL since the 2016-17 season.

Moutrey wasn’t anything fancy. He just came out and did his job every night.

In a less-enlightened era, Cramarossa would likely have earned a moniker reflecting his willingness to tangle with a much bigger opponent. In this day and age, we’ll go with “Moxie Joe”. As in, “Jeez, Michael McCarron’s knocking our kids around the crease, but at 6’6″, 240, who’s gonna stop…look, there goes Moxie Joe!”

Mad respect to Cramarossa, who had no problem dropping gloves with several heavyweights for the IceHogs after coming aboard in late November. He also added a level of veteran presence following the retirement of Kris Versteeg.

Cramarossa chipped in with 12 points (5 G, 7 A) in 42 games, with a couple of shootout tallies (both of which won games against Grand Rapids). His eight fighting majors was second in the AHL; six of those came while rocking a Hogs sweater.

Man Of The Year-Collin Delia

The IceHogs announced earlier this month that Delia had been named the team’s representative for IOA/American Specialty AHL Man of the Year award. Delia was a ultra-visible presence in the Rockford community when he wasn’t anchoring the Hogs in net.

This is the second such award for Delia, who earned the award back in 2017-18.

Like that rookie season, it was an up and down affair for Delia. He struggled mightily out of the gate and was benched for the better part of three weeks. He was the Hogs main man in net for most of the last month of the season. Delia finished 2019-20 with a 2.66 goals against average and a .912 save percentage.

Sikura The Elder narrowly edges out Sikura The Younger for M-V-P of R-F-D.

After an injury slowed his roll in 2018-19, Sikura led the IceHogs with 34 points (14 G, 20 A). His skater rating (plus-ten) was second to brother Dylan (plus-11) this season. He took over the captaincy after Versteeg left the team. He was Rockford’s best penalty killer and also had three power play goals.

Plus, he was instrumental in getting teammates Matthew Highmore and Dennis Gilbert to the BMO Harris Bank Center for Rockford’s Lego night. In his dreams, that is.

(FYI, all I had to do to find that video is go to YouTube and type in “Tyler Sikura’s LEGO Dream”. God bless the internet.

Dylan was one helper shy of Tyler’s point total, though he was only in Rockford for 45 games. When he wasn’t with the Blackhawks, Sikura The Younger was the offensive catalyst for a team that struggled to score at times this season.

Back in October, I posed several questions concerning the 2019-20 season. Hindsight being what it is, here are the questions I asked, plus the answers I received.

What actually happened: Saarela had 12 goals and 19 assists-after the Hawks traded him to Florida. Boqvist totaled six points (G, 5 A) in the 15 games he spent in Rockford. Highmore (4 G, 8 A in 21 games) spent most of the season in Chicago.

Krys never really got his offensive game on track; he didn’t put his first puck in a net until January 15. Krys finished the season with two goals and four assists in 24 games. This was a bit underwhelming, in my opinion, as I thought Krys would do a little more on the offensive side.

Carlsson was the only defender with offensive punch once Holm departed. Up front, it was Hagel, the Sikuras, John Quenneville (13 G, 9 A) and Entwistle that led the way. When all was said and done, however, Rockford lacked big-time point producers.

At 2.48 goals per game, the Hogs were the lowest scoring team in the Western Conference. Only Bridgeport (2.41) scored at a worse clip than Rockford.

What I said: “Kurashev, Boqvist…and Hagel.”

What actually happened: Well, Boqvist impressed the Hawks enough for them to recall him after those aforementioned 15 games. Hagel started slowly in the first month, then had 11 goals and four assists in November and December.

Kurashev? Like Hagel, he was hitting his stride after getting a few games under his belt. He had five goals and nine helpers in the 21 games from November 6 until he was injured in Manitoba December 29.

What I said: “I really, really hope so.”

What actually happened: I’ve documented the improvement in Fortin in terms of uniting rubber and twine earlier in this post. Whether he has enough scoring ability to make an NHL roster is still up for debate, but he certainly showed an increased offensive presence for the IceHogs.

What I said: He’ll play 60, with 16 goals and 16 assists. Anything above this is gravy. Heck, if he hits those numbers, its still gravy.

What actually happened: There was no gravy. There was barely any Versteeg.

The veteran picked up an assist in four games, then missed about a month with an injured hip. Versteeg gave it one more go for a pair of games in November before citing an inability to handle the AHL banging and getting out of Dodge.

The question regarding Versteeg entering the season was whether there was anything left in the tank. The spirit was willing, at least; Versteeg looked to have a great attitude in his second stint in Rockford. Unfortunately, his body couldn’t hold up it’s end of the bargain.

What I said: Well…first, the Hogs will need to find a way to get the best of the veteran-laden teams in their division like Chicago, Milwaukee and Grand Rapids. It really depends on how quickly a team with 12 rookies can get up to speed in the AHL.

What actually happened: Well…you kind of know how this ended up.

Rockford was in fifth place in the Central Division, tied with the Wolves with 62 points. Chicago had a pair of games in hand on the Hogs, as did the bulk of the teams battling for that fourth playoff spot.

The IceHogs were 4-5-1 in their last ten games. Hagel and Carlsson were up with the Blackhawks, as were Highmore and defenseman Nicolas Beaudin. They were going to have to win nine or ten of their final 13 games to have a legit shot at a postseason spot.

Seven of those games were against Iowa and Milwaukee, who absolutely owned the Hogs this season. Rockford was 2-11 against those teams. Could the piglets have put together a run and made the Calder Cup Playoffs? Maybe, but I don’t know that they had it in them to reel off the required stretch. With the AHL season looking like it is kaput, that point is moot.

I’ll be back in a week or two to put a finer point on the IceHogs abbreviated season. Follow me @JonFromi on twitter and I’ll see if I can’t whip up some thoughts on the IceHogs while in captivity.