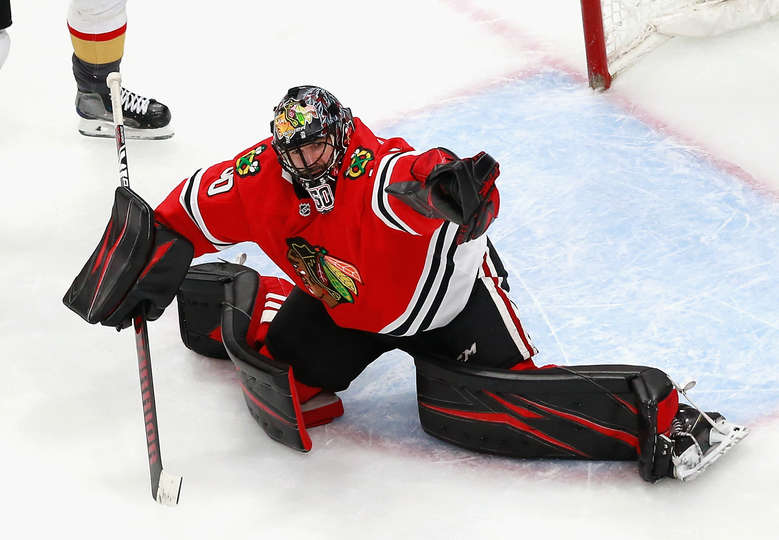 Or 3 to 1, whatever. What a perfect microcosm of what you could only loosely call any of the Hawks’s success this year. The team gets its doors blown entirely off the hinges, only to win on the back of their rafter-worthy best goaltender in team history. We are all vile, disgusting creatures who do not deserve the radiance that is Corey Crawford. And yet, he giveth for at least one more game.

– Corey Crawford is the only reason this team avoids two consecutive first-round sweeps. The Hawks were completely overwhelmed from the get-go and if not for Crawford may have given up 10. He’s the best this franchise has ever seen, and we have the privilege to see it in real time. Getting to watch him could be your only reason for wanting this iteration of the Hawks to keep winning. You’d be completely justified.

He stopped 48 of 49 tonight. The Knights had the puck for more than 70% of the game. Their team xGF% was 71+. And Crawford held them to a single goal. According to NaturalStatTrick, Crawford stopped all nine high-danger shots, although it felt like each and every one was of the high-danger variety. The Hawks had no business winning this game, and yet, Corey Crawford willed them to it.

The Hawks might not be so lucky if Crawford chooses not to stay, or worse, they don’t offer him a contract. Without him, the Hawks will be lucky to win 15 games total next year. He deserves his number in the rafters and anyone who disagrees can kiss my ass and call it a love story.

– Adam Boqvist is getting swallowed whole, and it fucking sucks to watch. Granted, throwing him in the deep end against Vegas was never going to flesh out. But it’s clear he’s overwhelmed and in his own head. The concern isn’t so much how he does in this series but whether this truly awful experience sours the team on him. I am extremely excited for Bowman to trade him for Kris Russell and point to tonight as justification.

– Top Cat finally bagged one. Even if it’s of the empty-net variety, we’ll take it. He’s been much more noticeable and aggressive over the last two games, and managed to be a rare instance of sweeping the puck out of a danger zone and into the corner late in the third. DeBrincat will always make his money scoring goals, but he’s got a sneaky ability to cause more turnovers than you’d expect. Just before his empty netter, he popped a puck loose at neutral ice and created a partial breakaway for himself.

– After the first period, Alex Nylander had more time on ice than Toews, Saad, Kubalik, and Dach. It wasn’t much more, but it was still more. He proceeded to post a goddamn motherfucking 6.25 CF% in four fucking minutes and 25 fucking seconds. One shot for versus 15 fucking shots against. That’s fucking profound. The very fact that this happened during an elimination game WITH THE LAST CHANGE should be enough to get Jeremy Colliton fired. It doesn’t matter how it happened, or why it happened, or that it may have happened because of an extra-long shift (guess how those extra-long shifts happen when he’s on the ice). That it happened at all is the problem.

The act of dressing Alex Nylander at all is lineup management malfeasance. Each and every time he is on the ice, the Hawks turn it over and the Knights end up with extended pressure. Every single time. He may have the individual tools to impress in non-game situations. But he is certainly not an NHL-caliber forward on this Blackhawks team, and likely isn’t one period the end.

Dress Sikura. Dress Hagel. Fuck, dress SAM’S GUY Philipp Kurashev. It may seem like pointless griping, since Nylander didn’t end up affecting much nor did he play much after the first, but it’s not. It’s the purest and most obvious example of Jeremy Colliton not knowing how to manage a lineup whatsoever. And if the next argument is “Well Bowman must be having a say in it,” that could be even worse.

There is nothing we learned tonight other than what we already knew. Corey Crawford is the most important player on this team by a country mile and the best goaltender in franchise history. We get to hold onto that and see him at least one more time. That’s enough for me.

Unspoken Line of the Night: I don’t think anyone Eddie and Pat knew died, which is good.