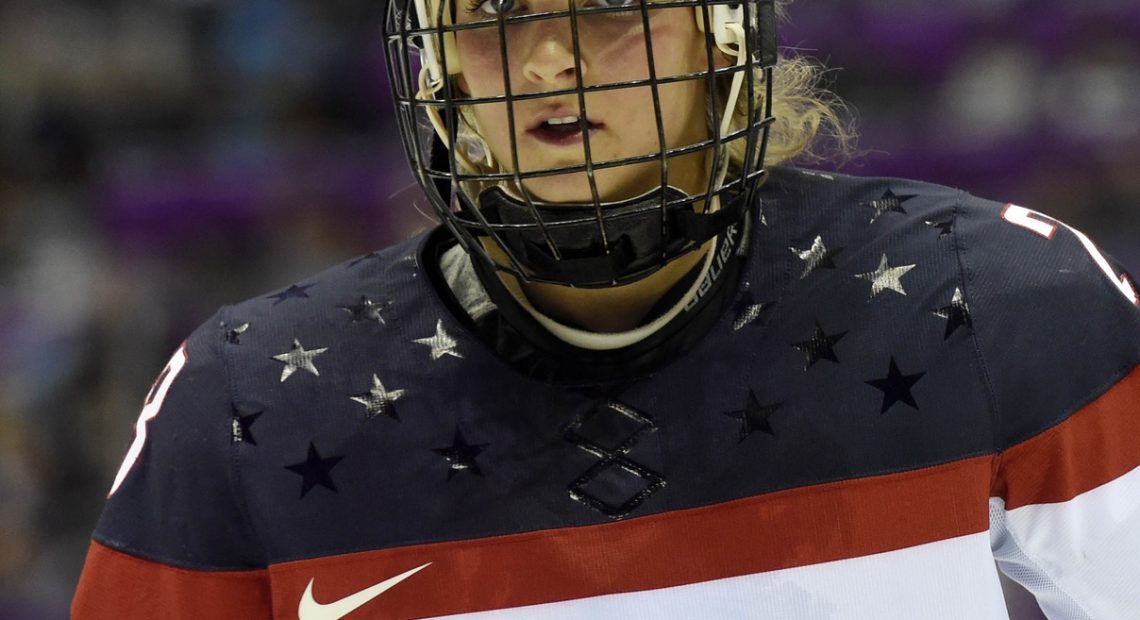 Our friend Cyndi B drops in to update all on what’s going on with the NWHL and CWL.

Our Beloved And Magnificent Ice Empress, Long May The Hockey Gods Preserve Her Glory, will be on the ice with the Gophers again this weekend for the first time since before the Sochi Olympics. Her last season in Minnesota was 2012-13, in which she scored 46G-55A-101 points in 37 games. Concussions are bastards, and we should all be kissing the dirt in thanks for the opportunity to watch Kessel finish out her NCAA eligibility on the ice.

You know how TV shows do episodes where the whole cast gets amnesia, and they can’t recognize each other and hilarious misunderstandings ensue? Imagine that but with a professional hockey team. Congratulations, you are now a Riveters fan.

New York went down by two power play goals at the end of the first, dug themselves back out of the hole to tie it up early in the third, but couldn’t hang on. Their scoring was pretty neatly representative of their shooting–Buffalo outshot them 46-22, and despite an uptick in New York shots in the second they really didn’t give Brianne Mclaughlin much to do. Seven penalties didn’t help, either. The Riveters’ PK held firm after the first, but then again most of those penalties came in the first anyway.

I cannot think of a more frustrating hockey team to follow right now than the New York Riveters, and I like the Blue Jackets. The Riveters are not by any means lacking for talent, and when they click they click beautifully. Then they lose it again, or start scrapping instead of playing hockey; last time they played Buffalo they turned a 5-2 lead into a 6-5 shootout loss by setting up camp in the penalty box and never leaving. The highest-scoring Riveter is Brooke Ammerman, who is only 14th in scoring in a league with four teams. The most penalized Riveter is also Brooke Ammerman, who is 2nd in PIM in the league.

Meanwhile, Buffalo is still clawing its way steadily out of an ugly first half to their season. At eleven points behind the Whale with only four regular season games left, they won’t be finding their way into second place. But two consecutive wins over the Riveters have at least let them hop up into third. The Beauts are 4-8-2 over the season, but three of those wins have come in their last four games–a very promising sign for consistent improvement.

The Whale bookended the All-Star break by coughing up another ugly loss to the Boston Pride. Boston got three goals in the first five minutes of the second, and Connecticut never recovered; unsurprising, when they were outshot 50-27. Meanwhile, Boston behaved perfectly predictably, by which I mean Knight assisted a Decker goal and Decker assisted one of Knight’s two goals. The Pride could save a few bucks by benching their first line and planting a puck-shooting machine in the opposing crease, but the machine would probably score less.

The usually reliable Christina Kessler allowed four goals on seven shots and was pulled less than ten minutes into this game. Backup van der Bliek plugged the bleeding, stopping 27 of 29 shots, but too late for the Furies to salvage the game. Toronto was outshot at 36-23, failed to convert on four power play opportunities, and ended up decisively shut out. Rattray and Jones both had four-point nights for the Thunder, with 1G3A each; Fortino came away with 1G2A.

The Canadiennes have spent a good chunk of this season third in the league, hovering just behind the deadlocked Inferno and Thunder. This weekend’s back-to-back victories against Calgary finally broke them through. It was an unstoppable force/immovable object matchup of Calgary’s league-leading 4.3 GF/G and Charline Labonte’s league-leading 1.31 GAA, and Labonte came out unmistakably on top, holding the Inferno well below their usual scoring volume on both nights.

With three weekends left in the regular season, Calgary is now two points behind Montreal, and Brampton two points behind them; Toronto is miles back. Defending champion Boston has yet to see a regulation win in 20 games played this season, and I checked the standings three separate times to make sure I wasn’t hallucinating that. Speaking of which:

It was off this week, but I regret any my prior implication that the 112 shots Lacasse faced in a single weekend were extraordinary. I checked her season stats, and in fact she is averaging a steady 51 shots against per game. At a certain point you have to wonder why the Blades aren’t willing to throw in their backup and give Lacasse even one night or weekend off. #PrayForGenevieve2K16