High On The Hog: Sweeping and Scrapping In Tucson 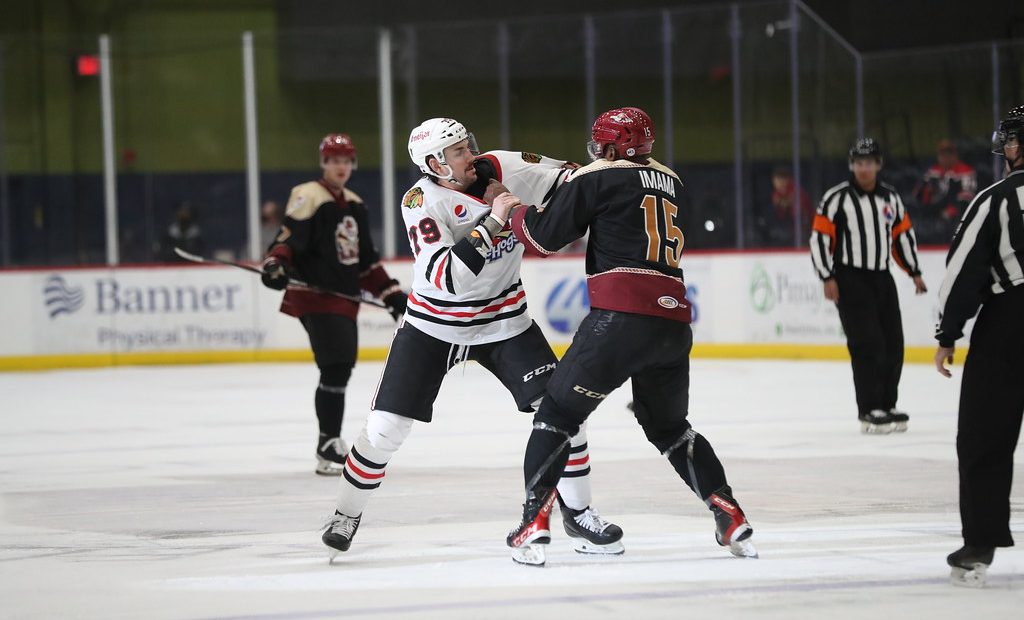 The Rockford IceHogs got the first half of a four-game road trip off to a great start over the weekend. The IceHogs continued their push to the Calder Cup Playoffs with a pair of wins over the Tucson Roadrunners.

In doing so, Rockford (30-24-4-1) tightened its hold on the fourth-place spot in the AHL’s Central Division. The IceHogs have won seven of their last ten games as the action moves further West to Henderson to complete the road jaunt.

Rockford opened the weekend with an overtime victory Friday night. The IceHogs rallied from a two-goal deficit in the first five minutes to take a 3-2 lead by the second intermission. Former Hogs skater Terry Broadhurst tied the game for the Roadrunners late in regulation, but Rockford won the game 23 seconds into extra skating when Dylan McLaughlin scored.

The IceHogs also fell behind Saturday before prevailing 6-3. Rockford took the lead in a back-and-forth contest with a shorthanded strike by D.J. Busdeker late in the middle frame.  Lukas Reichel put the game away with his 21st goal of the season early in the third period.

On Tuesday, the Hogs hosted Milwaukee with a chance to overtake the Admirals for third place in the division. That failed to materialize in the face of a 5-3 loss, but Rockford could avoid a play-in series by overtaking Milwaukee.

The Texas Stars have won five straight and are a few games behind the IceHogs. At this point, Rockford and the Stars would play a best-of-three series to decide who gets to take on the Chicago Wolves.

After several seasons of seeing its fight totals dropping, Rockford is currently tied for fourth with 32 fighting majors this season. With Tucson at the top of the league with 43 fighting majors, it should come as no surprise that some gloves hit the ice over the weekend.

Friday night, Kurtis Gabriel squared off with the Roadrunners Bokondji Imama a few minutes into the contest. It was Imama’s tenth fighting major of the season, earning an automatic one-game suspension from the AHL. Gabriel, with nine fighting majors this season (seven coming with the IceHogs), will be suspended following his next scrap.

On Saturday, Carson Gicewicz objected to a hit Ty Emberson laid on Cameron Morrison and took the Tucson defenseman for a spin around the dance floor. It was Gicewicz’s second scrap of the season; he also was tagged with an instigating minor and a game misconduct for his actions.

In all, 12 different Hogs have at least one fighting major. The bulk have been earned by Gabriel, Garrett Mitchell and Dimitri Osipov. The latter two each have six fighting majors to go with the aforementioned seven by Gabriel.

This will be the IceHogs highest total in this category since racking up 39 FMs in the 2016-17 campaign.