High On The Hog: Power Outage 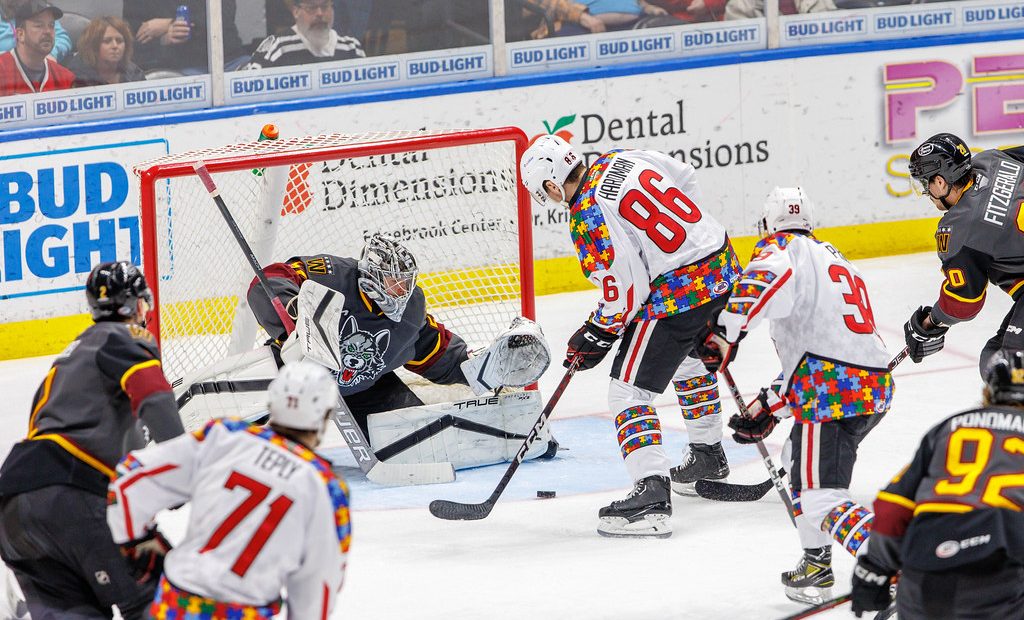 The Rockford IceHogs have hit a rough patch. As the piglets prepare for three games away from the BMO Center this week, there’s an issue for the team to address. It is a problem previously absent from Rockford’s list this season.

The Hogs are currently mired in a season-long four-game losing streak. Since beating Central Division-leading Texas in overtime January 3, Rockford has scuffled to a 1-5-1 mark. In those seven games, the IceHogs have just eleven goals. They haven’t scored more than two in any of those games.

This past week was particularly troubling, considering that Rockford was hosting three of the leagues worst teams in Grand Rapids, Springfield, and Chicago. The Griffins dropped four goals on the Hogs in the first four minutes of action, winning 5-2 on Wednesday night. On Friday, the Thunderbirds brought down the…uh…thunder, racing to a 2-0 advantage in the first ten minutes and crushing Rockford 7-2. Saturday, it was the Wolves turn to feast on the Hogs. Chicago, who led all the way, scored four times in the final frame en route to a 6-2 win.

Now, let’s not pile blame on the Rockford goalies. Wells and Soderblom had plenty of help.

When the Hogs offense is firing on all cylinders, they play a fast-paced game that keeps opponents on their heels. If the pace slows and the passing suffers, as it has during this recent stretch, there are a lot of holes that open up in the defensive zone.

Both goalies were bombarded with waves of enemy skaters exploiting those holes, jumping on turnovers and getting Wells and Soderblom out of position trying to defend the resulting rush. The losing has been a true team effort; no one has been especially good.

Lukas Reichel was up with the Hawks for a spell, which didn’t help at the offensive end. In four games back since his last cup of coffee in Chicago, Reichel has just a single assist. He skated with Dylan Sikura and Cole Guttman on Friday and had no more scoring luck than he did the following night with Mike Hardman and Michal Teply. Which is to say none.

Rockford is in its worst stretch since opening the season 1-3 with three straight defeats. It happens. It happened against three very beatable teams this week, but the Hogs are playing opponents, not records.

The IceHogs (20-15-2-2, 44 points) sit in third place in the Central Division standings. They’re three points behind Milwaukee and just a point ahead of Manitoba and Iowa.

The piglets will attempt to right the ship on the road this week. They will have to start in an arena (Wells Fargo) in which they lost twice to the Wild on January 7 and 8 to start this current funk. After taking on Iowa on Tuesday, Rockford visits Milwaukee on Friday before a stop in Rosemont to tangle with the Wolves.

IceHogs captain Garrett Mitchell was taken down in the offensive zone midway through the second period by Griffins defenseman Simon Edvinsson Wednesday. Both skaters slid hard into the half-boards, after which Mitchell rose and skated off to the locker room holding his right arm.

Mitchell did not return to action. No update as of yet, but Mitchell, who missed a month with a shoulder injury earlier this season, could be looking at another stretch on the shelf. He was a scratch for both games this weekend. It has been a tough campaign for Mitchell, who is pointless in 24 games in 2022-23.

On Monday, the Chicago Blackhawks recalled goalie Jaxson Stauber, who played so well in his NHL debut Saturday. On Friday, Rockford did see the return of goalie Arvid Soderblom from a groin injury sustained on December 28. Unfortunately, he gave up all seven Thunderbirds goals in the loss.

Buddy Robinson (9 G, 8 A) has been out of the lineup since playing in Colorado on January 13. Again, no medical update has been released by the team. Last season, the IceHogs were consistently updating the status of injured players. This season, it’s largely been back to the usual guessing game.