High On The Hog: Making The Most Of Limited Offense 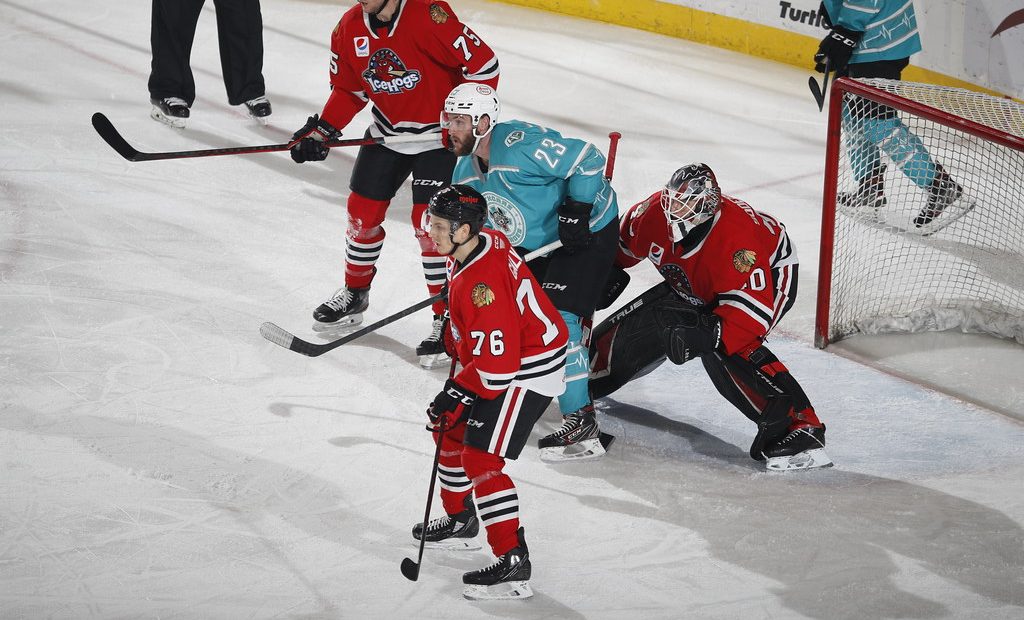 The Rockford IceHogs have become quite familiar with overtime hockey of late. Following this weekend’s action, Rockford has needed extra skating to decide each of its last four games.

The IceHogs (16-14-3-1) have earned six of a possible eight standings points in that span, despite just four regulation goals. Rockford’s latest overtime thriller was a big shootout win Saturday in Chicago. The piglets were badly outshot (36-21) but still prevailed 1-0, winning the shootout 2-1 on successful attempts by Michal Teply and Lukas Reichel.

A big road win against the Central Division leaders provided a bit of redemption after a disappointing 2-1 overtime loss in Milwaukee the evening before. Rockford scored a single goal in the weekend jaunt but improved to third place in the division standings with a .529 points percentage.

Leading the way defensively for the Hogs was rookie goalie Arvid Soderblom, who received back-to-back starts for the first time this season. Soderblom denied 68 of the 69 shots he faced this weekend, shutting out the high-powered Wolves with 36 saves Saturday.

Rockford has also tightened down the net when down a man on the ice. The IceHogs penalty kill has not allowed a goal in their last 15 chances over this four-game overtime streak.

With a 5-3-2 mark in January, Rockford’s next action comes on February 2, hosting Milwaukee at the BMO Harris Bank Center. The Admirals are the division’s hottest team, having won six in a row.

Defenseman Alec Regula missed two games with a bone bruise on his left leg, returning for Saturday’s win. Forward Cameron Morrison has been out the last seven games with a left hamstring injury. Dimitri Osipov has not played since receiving a game misconduct in Rockford’s January 21 game with Texas. Not sure if he is injured or sitting out while Kurtis Gabriel fills a similar role in the Hogs lineup.

A scary moment occurred late in Gus Macker Time Saturday when Lukas Reichel was checked in the offensive zone by Chicago’s Jamieson Rees. The Blackhawks top prospect was slow to get up and appeared to be favoring his right leg as he struggled off the ice.

Replays seemed to show Rees’ knee making contact just above Reichel’s right knee. Reichel remained on the Hogs bench and wound up potting the goal that won the shootout for Rockford.

Rees was not penalized for what, at first glance, looked like a knee-on-knee hit on Reichel. The contact was more incidental and looked a bit higher up on Reichel’s leg. Still, the organization may be holding its breath over the next couple of days.