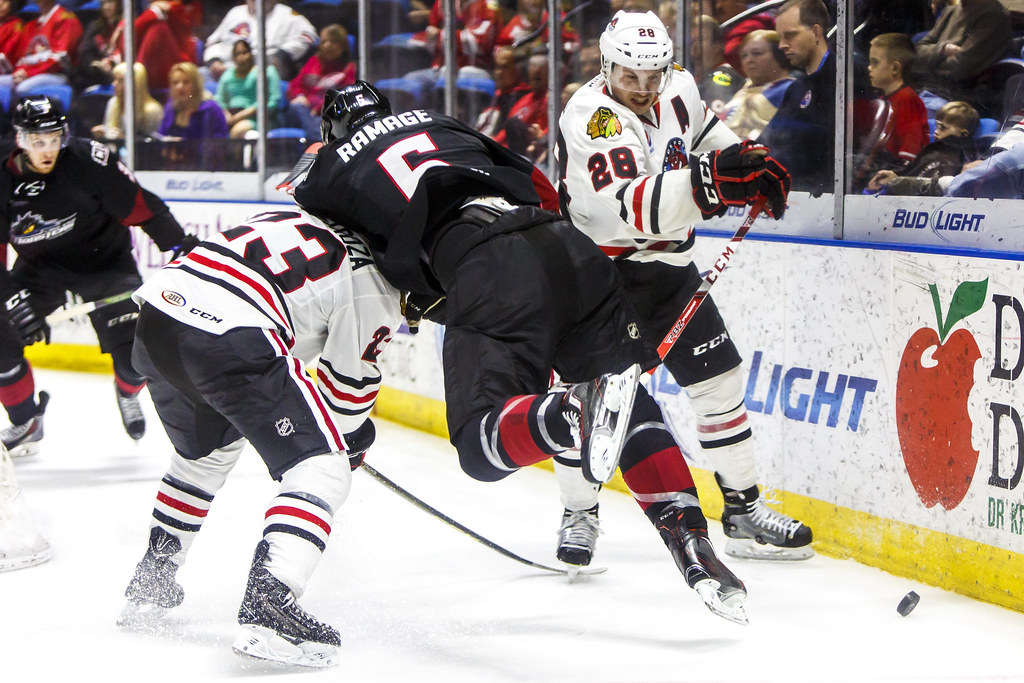 The Rockford IceHogs exit from the Calder Cup Playoffs was certainly swift. The Hogs were fortunate enough to get to begin their first-round series with Lake Erie at home but made zero use of having home ice for the opening games.

Rockford dropped both games at the BMO Harris Bank Center, then traveled to Cleveland and had the Monsters complete the series sweep Saturday night. With little exception, Lake Erie was the better team and dominated play.

I’m not ready to forecast the state of the farm just yet, so I’ll focus this week’s gaze on the first-round debacle and how it came to be.

A lot of Rockford fans are going to offer up theories as to why the IceHogs went belly up against Lake Erie. The merits of those theories have validity and are worth of debate. However, the fact of the matter is that Rockford was beaten soundly by a better team. Period.

Some will say that losing Michael Leighton down the stretch was the death knell for the season. If only the Mighty Leighton had been manning the crease, goes the song. It sounds ridiculous to say this after Mac Carruth gave up 13 goals in the three games, but the problem didn’t lay in who was or wasn’t in net.

Maybe it would have been a different series if the Leighton who played so well in January had been able to lead the Hogs into the fray last week. However, he would have needed to bring the group of skaters who suited up for the Hogs that month with him, as opposed to the Rockford team that scuffled through the final three months of the schedule.

A bit of squawking was also made about Lake Erie having the services of several players who had seen time in the NHL. The thing is, Rockford saw plenty of Josh Anderson, Oliver Bjorkstrand, Sonny Milano and Justin Falk during the regular season. Lake Erie didn’t stack this team to flatten the Hogs. Rockford was just outplayed by the Monsters.

Rockford just couldn’t score when the outcome was undecided. They spent most of the series down multiple goals and were unable to get themselves in a position to pressure their opponent.

If this first-round affair had been conducted back in December or January, maybe the Hogs are the ones holding the broom. That’s not how it works, though. Lake Erie moves on and Rockford begins sorting through lockers.

Next week I will offer a comprehensive review of the season along with thoughts on a slew of individual players. Until then, here’s a recap of the Monsters series.

A Recap Of The Monsters Series

By the time the Hogs solved Monsters goalie Joonas Korpisalo, it was academic. Lake Erie took a 1-0 series lead in front of a middling BMO crowd.

The Monsters first goal was an indicator as to what this night had in store for Rockford. Sonny Milano fired a shot that rang off the right post midway through the opening period. The puck struck Ville Pokka and floated into the net for a 1-0 Lake Erie advantage at the 8:32 mark.

In the final minute of the first, the IceHogs got a little lax getting back to defend a rush up the ice by Lake Erie and paid for it. Alex Broadhurst brought the puck up the left side, then zipped it over to Zach Werenski at the right dot. Mac Carruth didn’t have a chance to get across the crease before Werenski found the cord. With just 19 seconds remaining in the first period, the Hogs trailed 2-0.

Things did not get better for Rockford in the second period. After the Hogs let a power play opportunity to get on the board slip away, Lake Erie found themselves up a man after a Jake Dowell slashing penalty. Twelve seconds later, Dean Kukan redirected an Oliver Bjorkstrand shot past Carruth for a 3-0 Monsters lead 11:11 into the second.

Broadhurst, who would nab first star honors, added a power play goal of his own midway through the third period. Garbage time was officially declared when Mike Liambas and Lukas Sedlak got tangled up with each other, earning multiple penalties and ten minute misconducts that ended their evenings.

Rockford finally got the best of Korpisalo with 5:06 left when Tanner Kero set up Tyler Motte for a goal. With the Hogs net vacant, Dennis Rasmussen scored to close the gap to 4-2 in the 17th minute. However, Lake Erie got an empty net goal with just over a minute left to end hopes of a miracle comeback.

Rockford had a response to the Game 1 defeat; namely, to turn the physical dial to eleven and hit anything in a black sweater. The Monsters obliged and 20 minutes of brutality followed.

The officials left their whistles in their dressing room and the two team slugged it out for the bulk of the opening period. When the smoke cleared, the IceHogs had forged a one-goal lead on the strength of a Ryan Hartman power play goal.

The goal came after the Monsters Jamie Sifers was assessed the only penalty of what could have easily been a parade to the boxes. His slashing infraction was the catalyst for the games’s first goal.

Hartman came down the right side on an odd man rush with Bryan Bickell and fired on the Monsters net from just outside the circle. The puck glanced off the shoulder of Joonas Korpisalo, off a defender and into the basket at the 5:45 mark.

Up 1-0 at the intermission, Rockford was victimized for all the scoring the Monsters would really need in the opening minutes of the middle frame. Josh Anderson got the ball rolling for Lake Erie by knocking in a loose puck past a prone Mac Carruth 34 seconds into the second period.

The Hogs killed a Bickell tripping penalty, but Lake Erie struck again to take the lead. Oliver Bjorkstrand got a stick on a Justin Falk slap shot to beat Carruth at the 3:48 mark. Just 18 seconds later, Lukas Sedlak sent an off-angle attempt off of Rockford defenseman Cameron Schilling and into the net to make it 3-1 Lake Erie 4:06 into the second.

The Monsters kept Rockford on its heels in the last 15 minutes of the period, outshooting the IceHogs 21-6. Korpisalo handled the occasional Rockford attempt to climb back into the game, stopping 24 of 25 shots.

Anderson stuck a fork into the Hogs late in the game. Rockford turned the puck over behind their own net, leading to Markus Hannikainen passing to Anderson out in front of Carruth. The backhand attempt found twine at 15:28 to make it 4-1 Lake Erie. Anderson then added an empty netter in the last minute to complete his hat trick.

Lake Erie never trailed, closing out the first-round in front of over 10,000 Monsters fans at Quicken Loans Arena.

The home team opened the scoring 9:30 into the first. With Mike Liambas in the box for interference, T.J. Tynan skated toward the back of the Rockford net. Drawing the defense as well as goalie Mac Carruth, Tynan backhanded a pass that got through to Josh Anderson skating down the slot. Carruth never had a chance, and the Monsters led 1-0.

Zach Werenski doubled the Lake Erie advantage with a wrister from the point 7:40 into the second period. The Hogs were able to get a goal 13:54 into the frame when Jonathan Carlsson sent a shot toward goal from the top of the left circle. Joonas Korpisalo got a piece of the attempt with his glove but couldn’t prevent it from nestling into the basket.

Although Vinnie Hinostroza ended the second with a tripping minor, the IceHogs trailed just 2-1 going into the final 20 minutes. Unfortunately for Rockford, the Monsters power play proved up to the challenge. Oliver Bjorkstrand scored 19 seconds into the final period for a 3-1 Lake Erie lead.

The IceHogs got a goal of their own on the man advantage near the midway point of the third. Dennis Rasmussen got a puck to the side of the Monsters net. Korpisalo retrieved it and attempted to clear, but Tyler Motte was on hand to pick the goalie’s pocket. Motte skated into the blue paint and backhanded his second goal of the postseason at 8:49 to cut the lead to 3-2.

That’s as close as the Hogs could get. Daniel Zaar and Ryan Craig scored for the Monsters to build a 5-2 lead over the next six minutes to regain control of the game. Mark McNeill tipped in a Tanner Kero shot to give Rockford a third goal with 1:26 left on the clock.