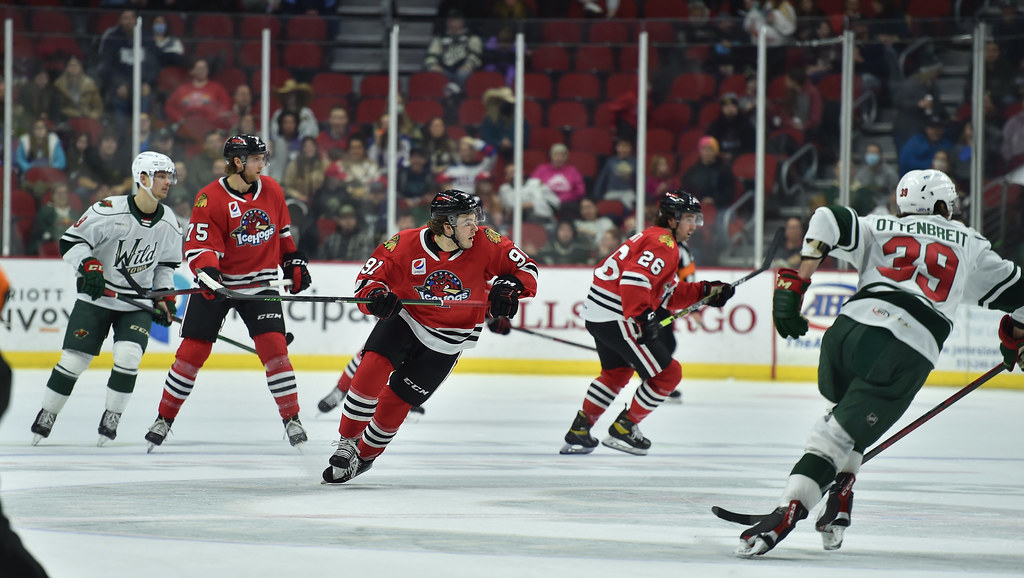 The NHL will be eliminating the taxi squad following this weekend. For goalie Cale Morris, it was both a blessing and a curse. On one hand, the taxi squad garnered him an NHL entry contract. However, it came at a price.

The effects of spending nearly two months removed from game action were on full display Saturday night at the BMO Harris Bank Center. Morris struggled mightily in a 4-2 loss to the Iowa Wild.

Hard to blame a guy who got his last start seven weeks before.

Rockford was finishing up a home-and-home weekend with Iowa on Saturday. Arvid Soderblom, who has been fantastic of late, had started the piglets last four contests, including a 4-2 victory in DesMoines Friday night. The organization must have felt it an opportune time to get their latest goalie prospect some time between the pipes.

To the surprise of no one, there was significant rust that needed shaking off.

Morris gave up four goals of varying softness on a night where the IceHogs out shot Iowa 35-22. Rockford controlled a large portion of the action Saturday but found themselves in a deep hole through 40 minutes.

A rebound left in front of Kyle Rau at the right post opened the scoring for the Wild 14:30 into the first period. Rockford continued to create scoring chances and was still in the game at the midway point. That’s when the bottom dropped out.

Marco Rossi entered the Rockford zone with Hogs defenseman Ian Mitchell defending him. Rossi’s perimeter shot beat Morris to the twine for a 2-0 Iowa advantage 11:38 into the second period. Morris let a puck tumble out of his glove to give Mason Shaw a power play goal at the 16:27 mark, then was victimized by a ill-timed Hogs turnover a minute later. Mitchell Chaffee converted on his wide-open look from the slot and Rockford’s fate was cast.

Morris did prevent a fifth Iowa goal in the third period, aided by facing just four Wild shots and spending the last five minutes on the bench while Rockford attempted a comeback with an extra skater.

Morris was excellent in his previous start with the IceHogs, a 2-1 victory over Henderson on December 11. The former Notre Dame goalie then returned to the Indy Fuel, where he had spent most of the 2021-22 season, for a pair of wins before the Blackhawks needed a goalie in the face of COVID. Morris was signed to a one-year entry deal on December 31 and was added to the taxi squad.

Being idle for the sake of filling a roster spot is not ideal for a goalie. Ask Collin Delia, who spent a good portion of last season twiddling his thumbs. Rockford faced veteran Andrew Hammond, who had sported a 2.01 GAA in nine starts before joining Minnesota’s taxi squad. Friday was his return to action after a month of watching and waiting. He gave up four goals to Rockford on 23 shots.

If I understand correctly, Morris would need to okay an assignment back to Indy as a player on an NHL contract. When Kevin Lankinen returns to Chicago from his hand injury, that may be the only way Morris gets the work in net he needs.