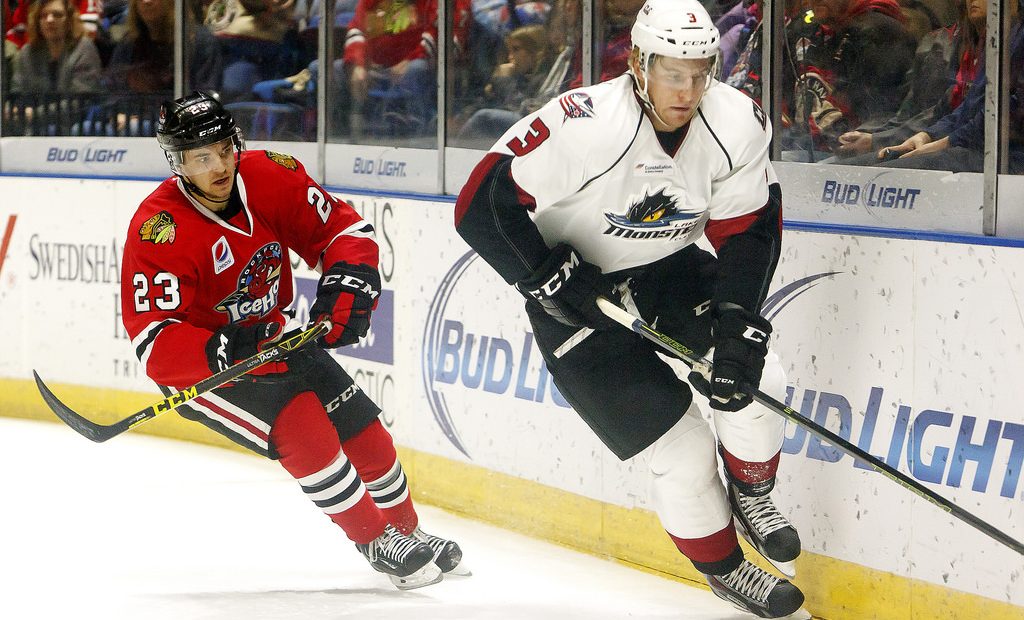 Jockeying for position ahead of the Hogs are Milwaukee, Chicago and Lake Erie. The Admirals beat Rockford in a shootout Friday night before the IceHogs topped the Monsters Sunday afternoon to break a two-game skid.

Milwaukee has had the hottest hand of late, going 9-0-1-0 to move into the division lead. The Wolves have points in eight of their last ten games. Rockford will see both of these teams during the holiday weekend.

Another Central Division rival that may be waking up are the Grand Rapids Griffins, who beat the Hogs Wednesday night and are now on a three-game winning streak after a very poor start. Of course, the Griffins were in a similar funk to start last season and wound up in the Western Conference Final.

Rockford just finished a 13-game run of division games, during which they went 9-1-1-2. Still, the IceHogs find themselves looking up at a few teams.

The Hogs penalty-killing unit has been getting a bad rap. It’s easy to look at the 13 goals Rockford has surrendered and deduce this group mediocre at best when down a man.

Over half those goals were allowed in the first four games of the campaign, though. Over Rockford’s last ten games, it’s been a different story.

In that span, the IceHogs have given up just three goals on 45 opposing power plays. That is good for a 93.3 kill percentage, which would lead the league. I know…candy and nuts, but don’t accept Rockford’s current 84.3 percentage for the season at face value.

The power play is still sputtering along at 10.4 percent. In that same ten-game stretch, it’s been only slightly more effective. Despite generating high-percentage chances, Rockford is hitting at a 10.4 success rate.

Sunday afternoon was a notable exception to this, but the Hogs have looked sharp quite often. In many opportunities the puck movement has been terrific right up until it’s time to move it into an opposing net.

Ted Dent has shuffled the pieces on his two power play units in attempt to find a spark. Perhaps the IceHogs are looking at better puck luck for improvement in this area.

Rockford’s Day With The Cup

On Sunday, IceHogs fans were treated to a chance to pay homage to the Stanley Cup. The game against Lake Erie was a sellout as would be viewers were paraded around the arena on a concrete pilgrimage for the greatest trophy in sports.

This being the third time for cup-viewing, the procession certainly had an amusement-park feel to it. Opening the building 15 minutes before the announced 1:00 p.m. time for season ticket holders, the BMO staff got everyone who requested an audience with the cup through the line with five or six minutes left on the game clock.

You could even take a picture of one of the other trophies assembled together in the upper lounge of the arena. That is, as long as you didn’t actually stop walking while you took the picture.

In a scene that was a bit lower in profile, IceHogs GM Mark Bernard was standing around the concourse with his Stanley Cup ring. Not only was Bernard making himself available for photos with nary a BMO staffer in sight, he was handing it over and letting anyone who asked to try the ring on. I thought that was pretty cool; then again, that’s the type of guy Bernard is when it comes to interacting with the fans.

What I Should Have Asked Mike Peck

Also walking through the concourse was Director Of Business Operations and former IceHogs announcer Mike Peck. Peck is another guy who doesn’t seem to mind stopping and talking with the fans, so I wish we had done so to ask him a question on the minds of our usual group moments before we saw him.

This concerns a practice Rockford instituted a few seasons ago. During the second intermission of a slew of home games, the IceHogs would bring a player who was a scratch that evening out to the Stars Of Tomorrow display. There, they’d sign for 20 minutes and pose for pictures.

This season, I don’t think the team has done this once. I’m sure there is a reason for this and I’m curious as to what that reason is. Maybe I’ll ask someone this week.

In light of IceHogs forwards being a little banged up, a couple of new faces were with the team this week.

Tuesday, Rockford recalled forward Daniel Ciampini from the Indy Fuel. The 5’11”, 185-pounder from Union College had signed an AHL deal with the Hogs this summer. Ciampini played in Wednesday and Friday’s games.

Friday, Fuel forward Josh Brittain was inked to a PTO by Rockford and was in the lineup for both weekend tilts. Brittain, who is 6’5″, 230, was at the IceHogs training camp this past fall.

For the first time in a month, the IceHogs failed to pick up a point, rallying from a two-goal deficit before dropping the decision to the Griffins.

After a scoreless opening twenty, Grand Rapids built a 2-0 advantage with goals by Andy Miele and Nathan Paetsch. The IceHogs got back into the game late in the second period via the blade of Bryan Bickell.

Xavier Ouellet got a little careless with the puck while bringing it out from behind his net. Bickell made the defenseman pay, swiping the puck and knocking it past Griffins goal tender Jared Coreau with a dozen seconds remaining in the middle stanza.

Down 2-1 going into the third, Rockford drew even with a quirky goal from Jake Dowell. Looking to center the puck from the left corner of the Grand Rapids zone, Dowell’s attempt struck Coreau and tumbled into the net.

Tied at two goals midway through the final period, the Griffins took little time to respond. With Grand Rapids forward Eric Tangradi providing a screen of Hogs goalie Michael Leighton, Robbie Russo flipped in a long shot from the point that slipped by Leighton and in for the game-winner at the 10:11 mark.

Both teams had a ton of chances on the night; Leighton stopped 31 of 34 shots and turned away a half dozen prime chances by Grand Rapids. In the other net, Coreau was equally important to his team being in a position to win, stopping 33 of 35 Rockford attempts.

For the second game in a row, the Hogs rallied to tie the game in the third period. Despite picking up a point, Rockford wound up on the short end of another one-goal decision to the Admirals.

Mark Visentin was more than good enough to pick up a win. Although the Hogs goalie made 28 saves on 29 shots, Kevin Fiala and Frederick Gaudreau beat his stick side in the shootout to seal Rockford’s fate.

Gaudreau’s conversion of a rebound at the left post broke a scoreless tie 5:04 into the third period. Rockford was able to draw back even when Ryan Hartman took a pass from Chris DeSousa around the Admirals net. His shot glanced off of Milwaukee goalie Marek Mazanec and into the net at 16:55 of the period.

Hartman, DeSousa and Pierre-Cedric Labrie made for a strange line combination. It was, however, the most effective IceHogs line of the evening.

This was a night in which Vinnie Hinostroza and Mark McNeill were among the scratches. The top scoring line of Bryan Bickell, Dennis Rasmussen and Jeremy Morin was held without a shot on goal. Hartman, DeSousa and Labrie created chances consistently throughout the contest.

The IceHogs were called for too many men two minutes into Gus Macker Time but refused entry of their net, necessitating the shootout. Mazanec watched Erik Gustafsson lose control of the puck on Rockford’s first attempt. He then knocked away the attempt of Garret Ross to end the game in Milwaukee’s favor.

Penalty Kill (Held Milwaukee scoreless in four chances, including a 4-on-3 in OT)

The IceHogs faced a Monsters power play unit that was ranked fifth in the league but snuffed out six man advantages. The even got the game-winner on a shorthanded tally in front of a sellout crowd, all of whom had the chance to view the Stanley Cup.

Midway through the first period, Garret Ross was sent sliding into the end boards in the Monsters zone by Justin Falk. Ross made it back to the bench but was helped to the locker room a few minutes later. He appeared to be limping as he entered the tunnel and did not return to the contest.

Dane Walters got Rockford on the board on a fine individual effort following a rebound of an Erik Gustafsson shot. Walters found the puck coming off the pads of Lake Erie goalie Joonas Korpisalo and flipped a backhander toward the net.

Korpisalo got in front of the attempt but Walters stuck with it and sent another backhand attempt across the border and into Twine City. The Hogs took a 1-0 lead at 16:55 of the opening period.

The score stayed that way until the third period, when Josh Brittain was sent to the box for interference. Daniel Paille did the heavy lifting for the IceHogs with a ferocious fore check, winning contol of the puck behind the Monsters net and centering to Jake Dowell. Dowell, who was instrumental in the PK effort all afternoon, cued the horn for a 2-0 Rockford advantage at the 6:18 mark.

Lake Erie would draw to within a goal when Derek DeBlois scored at 8:49 of the third. However, the IceHogs tightened up on defense and sealed the deal with a Ryan Hartman empty-net goal with just over a minute to play.

Penalty Kill (Held Monsters scoreless in six attempts and got a shorty from Dowell.)

Rockford takes a break from division opponents Wednesday when it hosts San Antonio. The IceHogs then have a big weekend with what are currently the top two squads in the Central Division. The Wolves come to the BMO Harris Bank Center Friday night before the IceHogs make a trip to Milwaukee.