High On The Hog: A Look At The Numbers 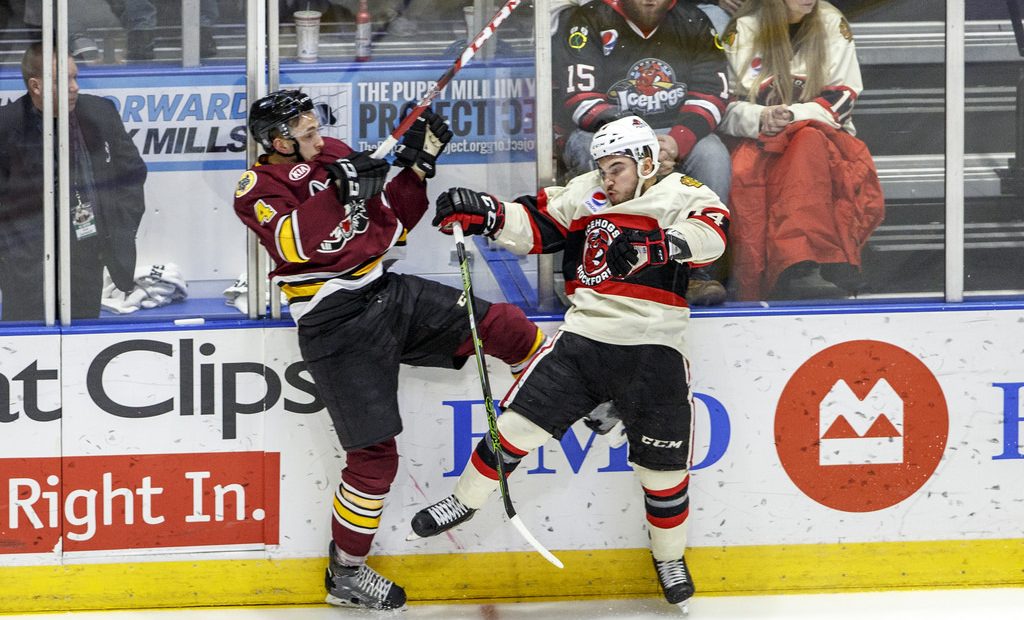 The lads west on I-90, the Rockford IceHogs, finished up a stretch of home cooking that saw the team go 7-1-0-1. As for myself, I was on a road trip and wasn’t around to catch the action.

I’ll provide some condensed recaps in a bit, as I did go back and check out what was another successful week for Rockford. As the AHL takes a quick breather for their All-Star festivities, I thought it would be fun to delve into some numbers this go-round.

Why wasn’t I at the BMO this week, celebrating a couple of big Central Division wins and Michael Leighton reaching a big milestone in net?

While the Hogs claimed five of a possible six points this week, I was holed up in a hotel room in Central Illinois. Peoria, to be exact.

“Hey, the Rivermen are doing real well down there. You should catch a game if’n you get the chance,” you might be thinking to yourself. I know that’s what I was thinking to myself; I just didn’t think I’d be free on Friday night. Well, the fates afforded me that chance and I did catch the Southern Professional Hockey League’s hottest club while I was in town.

Below are my thoughts:

I descended upon Carver Arena Friday night to watch Peoria get the best of the Fayetteville FireAntz by a score of 4-2. It was the Rivermen’s fourteenth consecutive victory; the streak shattered the previous SPHL record and was snapped by the Antz of Fire the following evening.

The Peoria Civic Center, in which the arena is housed, has gone under many renovations in the previous eight to ten years. None of those upgrades seem to have found their way to the hockey venue. If my seat wasn’t there when they opened the building in 1982, I would be surprised.

Carver Arena’s appearance is largely as it was back in the early nineties where the Rivermen patrolled the IHL and won 18 straight back in the fall of 1990, a pro hockey record that stood for over 20 years. You still can see all the old banners on the wall, the retired numbers-#22 Kelly Chase, #9 Doug Evans, #6 Tony Twist-still hang in the corner.

I have to share this regardless of the relevancy. Twist had 244 penalty minutes in 38 games for Peoria in 1990-91, the year of the streak as well as a Turner Cup as the IHL Champs. Was he the team leader in that category? Oh, hell no; in 61 games, Chase racked up 406 penalty minutes (as well as scoring 20 goals that year).

If you don’t see a lot of money poured into their building, you can see a lot of care put into the roster. Ever since Peoria’s former owners (before the Blues and later the Canucks bought the team) entered the SPHL (if you think of the AHL as AAA and the ECHL as AA, the SPHL is A league hockey) with this incarnation of the Rivermen, they’ve been among the top teams in the loop.

Peoria won the regular season title after finishing third in it’s inaugural campaign. The Rivermen also held those same spots in attendance. They lead the nine-team league by ten points and are drawing 3888 a game (third in the SPHL). This looks sparse in an arena that seats about 10,000 for hockey, but . Not surprisingly, Peoria leads the league in goals scored (3.38/game) and fewest goals allowed (2.06) by wide margins.

I wound up sitting near the penalty boxes, where several fans heaped abuse on the many Fayetteville players who wound up in time out. Apparently, several meetings with these players were arranged to be conducted in the parking lots around the Civic Center by the sound of it.

So, in conclusion: old barn, fun team to watch. Stop by and check out the Rivermen if’n you get the chance. For now, let’s move back north and put Rockford’s numbers under the microscope.

Rockford’s Numbers Under The Microscope

Through 44 games, the IceHogs have a record of 27-10-3-4, good for a Western Conference-leading 61 points. That number is without meaning due to the California teams playing fewer games this season; Rockford is second in the conference and first in the Central Division with a .693 points percentage.

The defensive numbers have been excellent throughout the season. The Hogs sit fourth in the league in goals allowed per contest at 2.43. Leighton has been a big part of this, having surrendered just four goals in three games this past week. His 2.04 goals against average and .931 save percentage are good for third in the AHL.

Leighton notched his 45th AHL shutout for his career Friday night in a 6-0 win over the Chicago Wolves. Leighton’s fourth shutout of the season ties him for first all-time with Johnny Bower.

The penalty kill overcame a rough start this season and is currently ninth in the league, stopping 84.6 of opponents man advantages. That’s a good thing, because the IceHogs have spent lots of time in the box.

Liambas has seven fights since coming back to action December 21 and leads the team with eight. Jake Dowell, who was an addition to the AHL All-Star festivities, and Chris DeSousa (pictured above) each have four scraps for Rockford.

The IceHogs are 13-1-1-1 when they win the special teams battle. They are 6-5-2-1 when they lose it. Rockford has scored 26 power play goals and given up 29. However, they do have seven shorthanded goals this season, good for third in the league.

Rockford’s hottest player, Vinnie Hinostroza, had a six-point week and now leads the team with 26 points (10 G, 16 A). He has put himself into 13th place in scoring among rookie skaters.

Pierre-Cedric Labrie paces the Hogs with 13 goals; Hartman (11), Hinostroza (10) and Tanner Kero (10) are right behind. Dowell leads the team in plus/minus with a plus-20 rating.

Kyle Baun also has no points this year for the Hogs, having played 12 games with the club before an arm laceration November 18 put him on the shelf. We may see Baun remove the goose egg from his stat line this month, as Chris Block tweeted that he and Kyle Cumiskey may be nearing returns.

Ville Pokka’s six goals (to go with 18 assists) pace the defense, though Cameron Schilling got a pair this week and has three this season. Dennis Robertson has gotten some regular playing time recently and his plus-12 rating leads the blue line group.

Rockford has gotten it done on the offensive end by committee; none of the IceHogs are among the league leaders in goals or points. The team is currently scoring 2.93 goals per game, a mark they share with Lehigh Valley as well as Central Division rivals Grand Rapids and Chicago for tenth overall in the AHL.

IceHogs fans have been teased on the breakaway this season; Rockford has had trouble converting when a skater gets behind the defense. I lack any statistical in-game evidence, but trust me; they could stand to dent the nets more often. Hartman has been awarded two penalty shots this season and missed both. The IceHogs are 1-4 in shootout action so far this season, hitting on just 20 percent of their attempts.

The Hogs are 19-2-1-1 when they score first this season. That .870 percentage is fourth-best in the AHL. Rockford is 12-0-0-1 when leading after one period and 22-0-0-1 after leading by two periods. That blemish was January 22 when Iowa won in…you guessed it…a shootout.

The Hogs were in firm control of the Checkers as they won a big division contest. Out-shooting Charlotte 38-24 for the game, Rockford scored first midway through the opening period.

Vinnie Hinostroza took a drop pass from Tanner Kero and used some deft stick handling to maneuver his way into the high slot. The rookie took full advantage of the space he created, flinging rubber past Daniel Altshuller and into the Checkers net. Rockford led 1-0 at the 10:36 mark.

Charlotte tied the game late in the first on a power play goal and it took a good portion of the second period to regain the goal advantage. Hinostroza got the scoring play started by picking off a clearing attempt and getting the puck into the corner of the Checkers zone.

Mark McNeill won control of the biscuit and set up Cameron Schilling for a one-timer. The offering befuddled Altshuller and cued the horn at 16:42 of the middle frame.

The Hogs added an insurance goal 2:04 into the third when P.C. Labrie reaped the benefits of a rebounding puck. The opportunity was created by Dennis Robertson, who held in a clearing attempt and threw the puck on net.

The three stars were Hinostroza, Schilling and Michael Leighton, who stopped 23 or 24 shots.

Hinostroza picked off a Petteri Lindbohm pass in the slot and victimized Binnington at 6:06 of the first period. Marko Dano collected a P.C. Labrie miss off the end boards and beat the Wolves goalie at 11:45.

Cameron Schilling took a Mark McNeill faceoff win and snuck a shot past Binnington for a 3-0 Rockford advantage at 18:01. The Hogs got goal number four on a shot from Kirill Gotovets that got through traffic and into the cage with 31 seconds to play in the first.

From that point on, the outcome was academic. Pheonix Copley replaced Binnington in goal and both teams engaged in a lot of yapping and scrapping. Hinostroza got his second of the night midway through the second on a power play goal. Tanner Kero closed out the scoring with 4:51 left in the contest, again on the man advantage.

The IceHogs picked up a point after Chicago knotted the game with 5:28 left in regulation and won it in Gus Macker Time.

The Wolves took an early lead with a Ivan Barbashev goal past Michael Leighton and off the far post 45 seconds in. The only score of the second period came at 8:38, when Tanner Kero bounced a tough-angle shot off of Jordan Schmaltz and into the net.

Ryan Hartman gave the IceHogs a 2-1 lead midway through the third period via a power play tally. Hartman was at the net to put back Marko Dano shot that had rebounded off of the pads of Pheonix Copley.

Rockford was looking to complete the weekend sweep of the Wolves before Zach O’Brien backhanded a loose puck off the crossbar and over the goal line. Neither team could find the mark in the last five minutes and it was time to play three to a side.

Just 1:02 into Gus Macker Time, Chicago came down the ice on a two-on-one rush. Andre Benoit fired past Leighton to end the game as well as a three-game IceHogs win streak.

Friday and Saturday is a home and home with Grand Rapids, starting Friday night at the BMO. The Griffins, who won 15 games in a row back in the 2015 portion of the schedule, have currently lost five straight. Rockford is 1-2 against Grand Rapids this season.