You Share The Same Fate As The People You Hate – ’18-’19 Team Previews: The Grunty McGruntGrunts 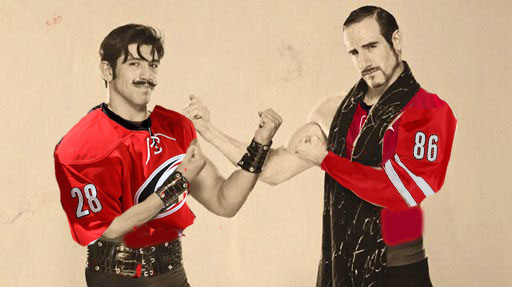 We move to the Metropolitan Division, and we start our tour through there with perhaps the biggest example of why hockey needs to die, the “new-look” Carolina Hurricanes. I put “new” in quotes because every utterance and belch out of Raleigh since Thomas “I Punch Myself To Wake Up And Shit” Dundon bought the team last year has been a call-back to some long-gone era that we all decided was best kept in a trunk. It’s like this guy watched that god-awful Bear Bryant movie by ESPN starring Tom Berenger and not only used it for fap material but made it his life ethos and is rich enough to make everyone around him adopt it as well. I mean, look at this happy horseshit:

The Carolina Hurricanes just announced their training camp schedule and if this isn’t the most hockey thing ever, I don’t know what is pic.twitter.com/l7CDwhf5iJ

What the fuck do you do with that? It’s not enough that this guy made his money by ripping off poor people, he’s now got to prove how tough he is by making his team play a style that outlived its usefulness in either 2007 or 1894? Who knows? Team Grit and Team Grind?! Little does this haughty fuckwad know that it makes sound more like a spin class for a gym in Lincoln Park filled with young mothers in $110 yoga pants. You can hear it now, can’t you? “ONE MORE TIME, TEAM GRIND! PUSH IT!” When someone tells him this he might actually Spinal Tap drummer. In about four months, “Carolina Hurricanes” is going to replace “toxic masculinity” as a term in the lexicon.

Anyway, let’s do this shit.

Goalies: So supposedly this is where the turnaround is going to begin, and it kind of has to. While Bill Peters’s coaching and system led to the Canes having a majority of possession and chances the entire time he was there, it supposedly left his goalies out to dry. Either that, or his goalie coach was actively using a voodoo doll on them during games to service gambling debts he picked up on a bad night in a country saloon in Saskatchewan. Either way, every goalie under Peters sucked out loud, and that included LOCAL HERO Scott Darling and new Hawks “backup” Cam Ward. I’m not sure I totally buy this, because the past four years the Canes were always on the good side of xGF% and scoring chances, but this was the theory. We’ll find out in Calgary. Actually we won’t because Mike Smith is still shite but whatever, we’ll get to that outfit of the bewildered soon enough.

ANYWAY…Darling is still here, and still slated to be the starter. He was simply woeful last year, with a .888 SV%. About halfway through the season you could see his confidence had been totally shot and he was completely lost. But I’m not going to tell you that’s who I think he is. While Darling’s first year came behind a still competent Hawks defense or better, his last two years were most certainly not. He was behind the declining Keith or ever-expanding Seabrook or the directionless theorizing of Trevor Daley or the corpse of Rob Scuderi or the rim-protecting of Darko Svedberg. And he still put up better than league-average numbers. Yes, it was as a backup and being a starter is a different thing, but I don’t think he’s Darren Pang back there.

The truth is likely in the middle. It’s no secret Darling’s movement is not great, and his starts on the road remain Scott Darling On The Road. But if he’s allowed to play a little more conservatively and use his size instead of his reflexes more, he can be more than serviceable. Which will look like Jesus has arrived to the 17 Canes fans, who haven’t seen serviceable goaltending since The White Stripes were still together.

He’d better be, because there isn’t much of a net (get it?) here. Backing him up is Petr Mrazek, with his missing “e.” Mrazek washed out of Detroit after failing to dislodge (not TEAM LODGE) Jimmy Howard, and then went to Philly when all their goalies got hurt and wasted everyone’s time. It’s been three seasons since Mrazek has even been league-average. Sure, he was behind some awful Wings teams (don’t worry, Stevie Y is coming to the rescue!) and if Rod The Bod behind bench can tighten up the Canes maybe there’s some relief to be found. The better bet for the Canes is that Darling finds it again.

Defense: Still unquestionably the strength of the team, and got even better if they hold onto Justin Faulk. Which they shouldn’t, because they should trade him here for a Manny’s corned beef, but that’s just how I feel. It’s also unclear how Dougie Hamilton is going to fit into the atmosphere created by the owner where grabbing yourself is considered a full sentence.

On paper, it looks great. Dougie is one of the five best d-men in the game and a pretty significant upgrade on Noah Hanafin, who was really good himself. They can really make the pairs anything they want here. They can keep their shutdown pairing of Brett Pesce and Jaccob Slavin together. They could pair Slavin and Dougie and have Faulk and Calvin de Haan together on the second with Pesce simply playing soccer with opposing skulls on the third-pairing. And Haydn Fleury, despite being another missing an “e,” is no slouch himself. Squint and there are four top-pairing guys here and two more second-pairing guys, if de Haan is fully healthy. And they can do anything they’re asked. So this team really shouldn’t suck as much as it has.

I assume Dondon takes Mrazek’s and Fleury’s missing e’s and grinds them with the rhino horns he puts in his coffee he thinks makes him more virile.

Forwards: And yet here’s the same problem as it always is. There isn’t a genuine top line forward to be found. Sure, Andrei Svechnikov will be one day, and that day may be as soon as December. Sebastien Aho probably could be one if you put him on a line with two other genuine, top-line players. But the Canes don’t have that. He probably never would have shown up, but this team should have been all-in on Tavares by trade and tried to convince him to stay. They definitely should be making calls on the impending UFAs like Tyler Seguin, Matt Duchene, and Artemi Panarin. They need the help. As good as the defense is, even with rebounded goaltending is this team going to score enough to beat out one of the Flyers, Penguins, Caps, Jackets for a playoff spot? Are they as good as the Panthers, who probably grab the other wild card? I’ll hang up and listen.

Our Special Boy is still making the first line go, which is a problem in itself because though we have various shrines set up for him throughout the city and suburbs to service our worshipping needs wherever we may find ourselves, he’s a second-line player. Jordan Staal is the #1 center here and he’s 30 and has never been anything other than a glorified checking center with a big dumb face. They lost 30-35 goals in Jeff Skinner, mostly because they thought he was a weak asshole who wasn’t going to stick around. And either they think Svechnikov will replace all of that or they have no plan. And even with that replaced this team missed the playoffs by a $50 cab ride. Michael Ferland was completely a product of getting to play with Johnny Gaudreau and Sean Monahan, and is going to be a Milan Lucic tribute band by the turn of the year.

Maybe grunting louder will solve it.

Outlook: Ok, first off, now that an actual hurricane is going to hit the Carolinas, this entire outfit is going to be a collar-tug the whole season. Secondly, whatever changes Brind’Amour (seriously, what the fuck is with this organization’s spelling?) makes from Peters, there’s a desperate lack of scoring punch here. Sure, the Predators get a ton of scoring from their defense, but they also have Filip Forsberg. There isn’t a Forsberg here. They’ve also got Rinne somehow throwing a .925 at people, and the Canes don’t have that either. Whatever help is in the system is a year or two away at best.

I want this team to be good, because of TiVo Targaryen and they’ve been one of the more entertaining teams to watch. Even if Peters’s system was reckless he at least was forward thinking and had his team push the play. I suppose with this defense Brind’Amour could go the other way and try and lock things down with that defense, and that might get them seven to eight more points. But the 15 or so they’re going to need to get into the playoffs? Seems a stretch.

Oh, and move them to Quebec already.