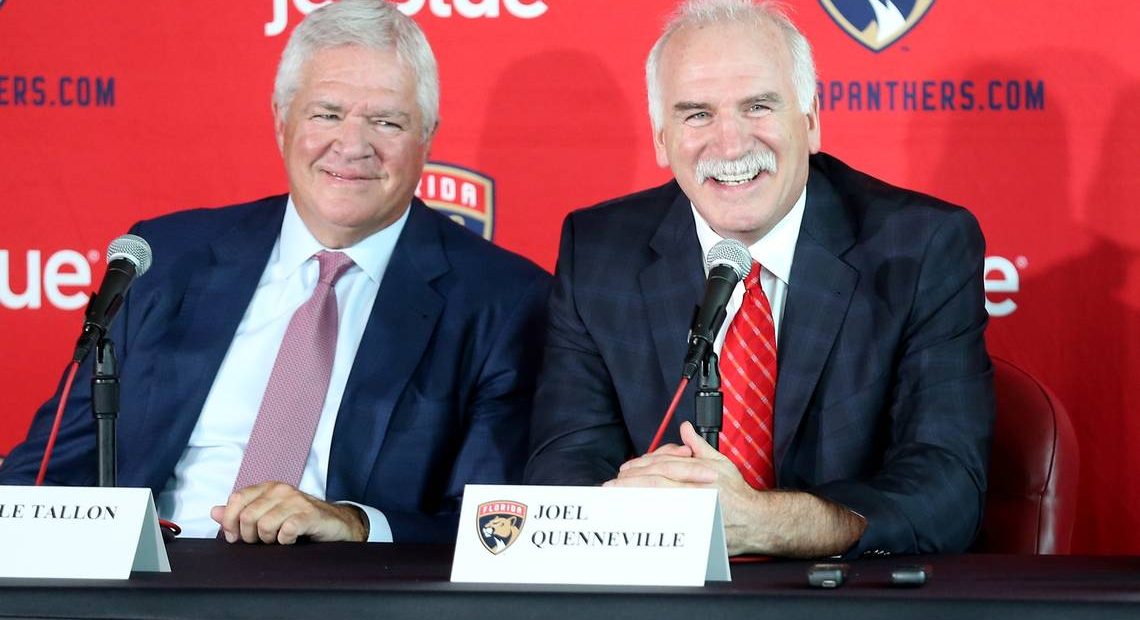 Well there are a couple of quite familiar faces, aren’t they? The departed namesake and an instant hall of fame coach will try to bring a level of sustained competitive hockey to south Florida that they haven’t seen since…well…ever. As batshit as it sounds, Uncle Dale and Joel Quenneville never even spent a full season together here in Chicago, but they’re going to try to make this thing work in Sunrise even if it kills them both. And it just might, but at least now they’ll leave behind nice bronzed and pickled corpses.

Goaltending: In a full 180 from a trick they had been pulling for the couple seasons previous wherein the Cats got solid netminding from an aging Roberto Luongo and James Reimer filling in whenever something fell off of him, last season the Panthers got absolutely no goaltending to help out what was a pretty spiky offense. Luongo started 40 games last year and arguably posted the worst numbers of his era-spanning career with an .899 overall and only a .906 at evens. Reimer was only a hair better at .900 and .909 respectively. Luongo decided that was enough to call it a career, and did so officially which hilariously dicked over the Canucks in having to eat the recapture penalty for the contraband contract they signed him to. Reimer took whatever he’s got left in the tank up the coast to Carolina, leaving Uncle Dale to have to revamp his entire goaltending infrastructure. Fortunately for him, there was an aging veteran in Sergei Bobrovsky who couldn’t wait to get the fuck out of Columbus and take the bags and bags of money everyone knew Dale was going to throw at him. Bob got a max seven-year term from the Panthers at $10 million per, which should take him until he’s 37. Even with the goaltending career curve being far more protracted than other positions, there’s always a risk of Bobrovsky’s crotch detaching given the high wire style he plays, and Joel Quenneville isn’t exactly known for his judicious management of goaltending workloads.  Still, the Panthers were looking for an infusion of excitement both by landing a name and by potentially making some noise in the post-season. Bobrovsky certainly should get him there even if a) his overall save percentage numbers have been in decline for three years while staying healthy, and b) only last season did he have even a representative playoff run, having absolutely shat himself with the Jackets two trips previous. As of right now, 22-year-old Sam Montrembleaut will get first crack at the backup role, but it could be a rotating cast of thousands if Bob doesn’t play 70 games. Which he just might.

Defense: Once again Joel Quenneville will have an honsest-to-god #1 defenseman to work with, in this case it’s Aaron Eklbad, who somehow is still only 23-years-old. Q likes his top pairing guys to be able to do everything, and Ekblad is certainly capable. Over the past few seasons his overall possession rate isn’t necessarily one that’d be associated with a do-it-all blue liner, but when taking into consideration that he’s had the toughest starts out of necessity and has been paired with Keith Yandle for two years, the picture starts to get a little clearer. And the fact that Quenneville hasn’t personally drowned Yandle with his barehands in some secluded corner of the Everglades and then chopped up his body on a fanboat is truly an upset. Anton Stralman moved a little east from Tampa to Sunrise in the offseason, and while he’s always been a textbook 2nd pairing puck mover, last year he finally started to show some signs of wearing down. No one is quite sure what it is Mike Matheson does or who he is, but Dale is paying him a fairly hefty salary at $4.75 mildo to do it until the entire state is submerged. Mark Pysyk is a hold over from the Computer Boys era, so Quenneville will hate him and put him at forward. At the very least he’ll call him Mike Kostka if only out of spite.

Forwards: Sasha Barkov is probably the best kept secret in the league, and if Q and Bob have any kind of positive impact on this team, that probably won’t be the case for much longer. Barkov is probably the second best two-way player in the league behind Patrice Bergeron now that both Toews and Kopitar have aged out of that level of effectiveness. Barkov absolutely erupted for 96 points nobody saw last year when he finally had two competent full time linemates in a healthy Jonathan Huberdeau and the very shoosty Mike Hoffman, who had 92 and 70 points themselves respectively. Evgeni Dadonov was a nice surprise (albeit at 30) with 70 points of his own despite the fact that a hurt Vincent Trochek only played 55 games last year, and was hindered when he did play. If he bounces back to his formerly reliable 50+ point output, particularly with Brett Connolly here to now provide a bit more scoring depth, the Cats could have a little bit more bite (GET IT?) to an offense that was already top-10.

Outlook: Barring injuries, or Sasha Barkov turning to dust under the workload Quenneville is certain to give him, the Panthers have made enough improvements to interject themselves into the playoff picture in the east, more than likely as a wild card, as the top three spots in the Atlantic seem fairly secure in Tampa, Boston, and Toronto. There are enough “ifs” here to not make it a completely foregone conclusion, but if Bobrovsky is even slightly above league average as he declines, Quenneville’s system is one of the few in the league that produces actual, tangible results almost immediately, and the Panthers weren’t that far off the playoff pace last year. And January 21st at Club 1901 is sure to be a highly emotional reunion, count on that.